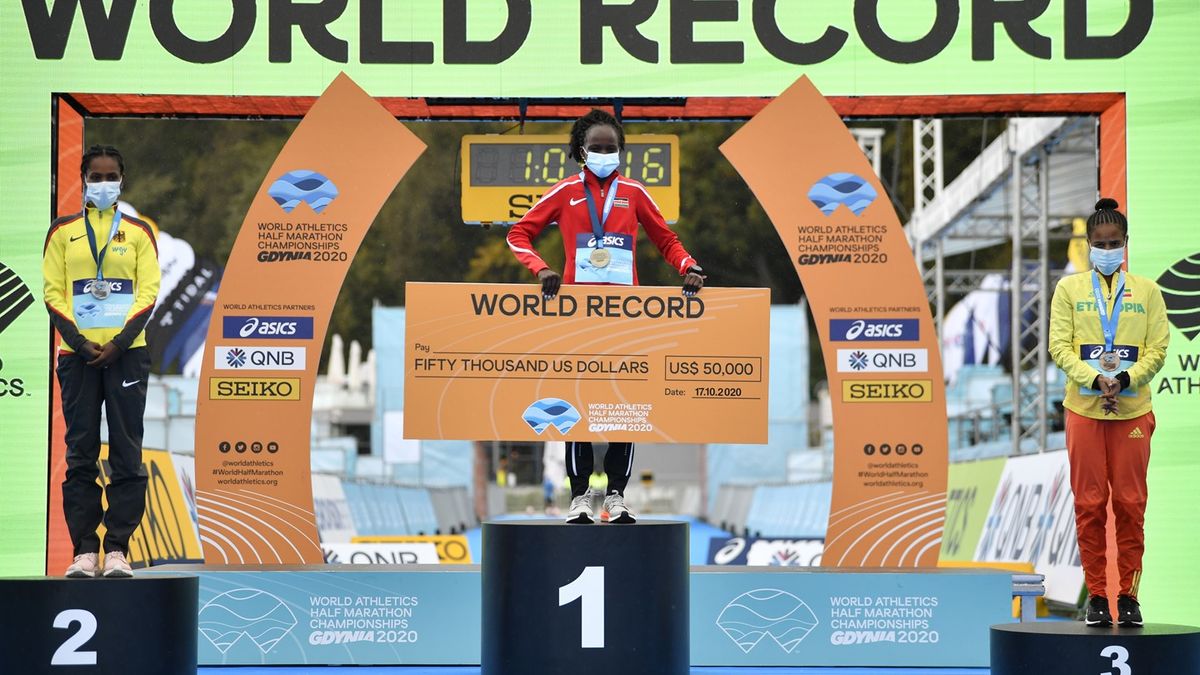 Kejeta stuns with 65:18 clocking for world half marathon silver

Germany’s Melat Kejeta produced an incredible display to win individual silver at the World Athletics Half Marathon Championships in Gdynia, Poland on Saturday (17) morning in a women-only European record of 65:18.

With a lifetime best of 68:56 prior to this race, Kejeta wasn’t even considered to be the leading continental hope despite Sifan Hassan being a late withdrawal due to fatigue after the Dutchwoman's recent feats on the track, and not many onlookers would have predicted any sort of European medal in the women’s race.

But Kejeta surpassed all expectations to win individual silver in an exceptionally high quality race to become the first European medallist at this championship since Lornah Kiplagat from the Netherlands won her third title in 2008. Her time also shattered Kiplagat’s women-only mark of 66:25 and she was only three seconds outside Hassan’s outright European record of 65:15.

Kejeta was also surpassing lifetime bests en route. Content to sit towards the back of a leading group which was composed solely of Kenyans and Ethiopians in the early stages as well as Yasemin Can from Turkey and Israel’s Lonah Chemtai Salpeter, Kejeta cruised through 5km in 15:21, 10km in 30:47 and 15km in 46:25 as the leading pack continued to dwindle in numbers.

A crucial point in the race came at the 17th kilometre when Ethiopia’s Ababel Yeshaneh and Kenya’s Joyciline Jepkosgei - the current world record-holder and former world record-holder respectively - were embroiled in a collision and subsequently played no further part in the discussion for the medals. Jepchirchir also had to hurdle the stricken runners to keep herself upright.

But Kejeta avoided the melee and was one of three athletes still in contention for the title at the 20km mark, which was reached in 62:04, the German running alongside Jepchirchir and the Ethiopian youngster Yalemzerf Yehualaw - both of whom had taken turns at the front.

In the race for the medals along the waterfront, Jepchirchir made a decisive break and it looked as though Kejeta would have to settle for bronze. But in a race marred by falls and collisions on the tight bends of the four-lap course, there was one final piece of drama as Yehualaw slipped slightly on the purpose-built finish and lost some of her momentum. This incident allowed Kejeta to secure a medal of a slightly brighter hue.

The two medals were Germany's first of any description at the championships, with the country's previous best result being the fourth team home in the now discontinued junior men's race at the inaugural championship back in 1992.

In seventh, four-time defending European cross country champion Can also shattered her Turkish record with 66:20 with Chemtai Salpeter 12th in 68:31, just one place ahead of the marathon-bound Fabienne Schlumpf who was rewarded with a significant Swiss record of 68:38.

In the men’s race, European 10,000m champion Morhad Amdouni from France was the leading European finisher in eighth in a national record of 59:40 to move to third on the European all-time list behind Switzerland’s Julien Wanders (59:13) and Mo Farah (59:32).

National records set in the men’s race in Gdynia